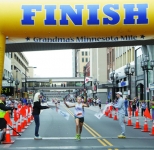 Last Sunday was a good day for Carlton County girls to run in Duluth.

Esko’s Kailee Kiminski took first place in the women’s Duluth Mile race (photo, above), coming in at 5 minutes, 22 seconds, according to the Grandma’s Marathon website. (Dad Dan Kiminski says the exact time was 5:21.9).

Kiminski, 17, crossed the finish line well ahead of her nearest competitors, taking first place for women (of all ages) in the Duluth Mile and for her 18-and-under female age group. Kiminski is a junior at Esko High School, where she is a multi-sport athlete, running cross country and playing soccer in the fall.

Another Carlton County runner, Anja Maijala, took second place in the Mile-long race, coming in nine seconds behind Kiminski, 5:31. Maijala, 14, is a freshman at Cloquet High School, where she participates in cross country, Nordic skiing and track.

Kiminski and Maijala ran in the Duluth Mile race for semi-elite runners, rather than the Minnesota Mile, which is for professional runners and offered $3000 for both the men’s and women’s race champion. The Minnesota Mile was also the final stop of the 14-event Bring Back the Mile Tour 2013.