Does Sebastian Coe’s Mile plan have the potential to help revive athletics? 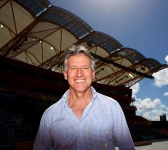 There are plenty of ways to skin a cat or, indeed, to pace a Mile, but perhaps embracing history is as valid as opening new frontiers.

Sebastian Coe pretended to have gone off-piste during a press conference yesterday by "accidentally" revealing plans to restore a Mile race into the Commonwealth Games athletics program.

"We have had the thought of introducing the Mile back into the Commonwealth [Games] and I have an ambition to create and celebrate our own heritage, because often we have events that are the bedrock of our history," the International Association of Athletics Federations (IAAF) President, a former Mile world record holder, said.

"Some of the great moments in track & field have been established in a Commonwealth Games. We still talk about the Miracle Mile, 1954 in Vancouver, these are indelible moments."

We were not told details such as precisely when it could be added or whether it would compliment or replace the 1500 meters. The Mile was dropped in favor of the distance 109m shorter at the Edinburgh 1970 Games.

Coe instead spoke extensively about celebrating the history of athletics and how the Commonwealth Games could be an "incubator of innovation".

I expect he was deliberately throwing the idea out there to see how it was received. The recent passing of Sir Roger Bannister, the first man to break the 4 minute barrier and the winner of the aforementioned "Miracle Mile", also made it more topical and any return at Birmingham 2022 would partly be a tribute to him.

My editor Duncan Mackay was sitting beside me and, being someone who has covered athletics for longer than I have been alive, he was positively purring with nostalgic excitement. Many other who were, shall we say, season observers of the sport thought similarly.

My instinctive reaction was less enthusiastic.