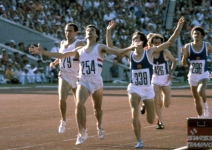 "The whole stadium was upstanding, arms outstretched, to join him in his ecstasy. They had witnessed a classic chase and race."

By Douglas Perry, The Oregonian

Jamaican superstar Usain Bolt proved once again this week that the 100 meter sprint is the highest-profile track event in the world. But that hasn't always been the case. In the late 1970s and early '80s, the Mile was unquestionably track's glory discipline.

That's because Great Britain's Sebastian Coe and Steve Ovett were at their peaks, riveting sports fans across the globe. The striking thing about their rivalry is that they traded the world Mile record back and forth in 1979 and '80 without facing each other on the track. So the anticipation bubbled over when they arrived at the 1980 Moscow Olympics, which were being boycotted by much of the West, including the United States.

Like all great rivals, they were a study in contrasts. The blue-collar Ovett, moody and introverted, hated talking to the press and avoided it. The university-educated Coe had the easy charm of a natural politician, which he would later become.

Ovett was considered a bully on the track, arrogantly stalking the race's leader, whoever that might be, solely to ratchet up the tension so he could then easily rumble past in the final stretch. Coe, meanwhile, was a gleeful front-runner, gliding into the lead at the opening gun and never relinquishing it. They were The Tough and The Toff, and, especially if you were British, you had to choose. "You were either for Ovett, or you were for Coe," wrote Pat Butcher in the 2004 book The Perfect Distance. "There were no agnostics."

Their expected showdowns in the 800 meter and 1500 meter races at the 1980 Olympics provoked a storm of headlines, even in countries that weren't sending athletes to the Games.

"It wasn't the Moscow Olympics. It was the Coe-Ovett Olympics," recalled American Mile star Steve Scott.