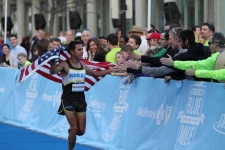 Top American middle-distance runners on display in Des Moines for $30,000 prize purse with $5000 for each race champion

Grand Blue Mile race officials announced a prestigious field of invitational championship participants in addition to the expected 3,500 recreational and competitive runners for the 7th edition on the streets of downtown Des Moines. On Tuesday, April 26, track & field Olympians and World Champions will compete for $30,000 in prize money in the men's and women's invitational championships.

The 2014 USA Men's 1 Mile Road champion and 2012 Olympic silver medalist Leo Manzano and two-time Canadian Olympian Nate Brannen will headline the men's invitational division. These two competitive athletes will be joined by handful of other elite athletes racing for the top prize of $5000 and the potential of a $2500 bonus for setting a new course record.

Returning for her sixth-consecutive Grand Blue Mile appearance is defending women's invitational champion Heather Kampf. The three-time USA 1 Mile Road champion and crowd favorite will attempt to best her own course record of 4:32.62, set in 2014. She will be tested by 2012 Olympic semifinalist and 2014 World Indoor Championship bronze medalist Nicole Sifuentes of Canada.

"Get excited for another year of high-caliber, competitive athletes committed to the Grand Blue Mile," said Chris Verlengia, Wellmark corporate sponsorship manager. "Our 2016 running will have something for everyone and promises to be a must-see for even the most casual fan."

While Grand Blue Mile kicks off Drake Relays week, it also marks the beginning of a busy track and field season in an Olympic year. The U.S. Olympic Trials for track & field start July 1, in Eugene, Oregon.

"Grand Blue Mile has always provided a good preview of what to expect from America's top talent later in the outdoor season, but there is certainly added enthusiasm with the Olympics being held this summer in Rio," said Verlengia. "We're honored to host some of the stars of competitive running and serve as the first stop in their pursuit of Olympic gold."

Registration open for Grand Blue Mile
New this year, Grand Blue Mile is a Healthiest State Initiative endorsed event. Registration fees are $15 for youth and $25 for adults. As part of Wellmark's commitment to improving the health of Iowans, event proceeds benefit Iowa Kidstrong school fitness programs and the Drake Relays.

For more information, to register for the race or view the course map, visit: grandbluemile.com