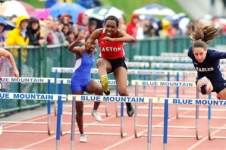 By Bruce Buratti, The Express-Times

We recently ran a story written by Associated Press sports writer Eddie Pells detailing a grassroots movement initiated by Ryan Lamppa, who is trying to resurrect the Mile run in track & field.

This certainly struck a chord with me. I've been covering track & field in this region since the fall of 1972 and for the first seven years I wrote about high school track, track distances were administrated in yards. Sprints were contested over 100, 220 and 440 yards and the longer races were run over 880 yards, Mile and 2 Mile.

But at the end of the 1978 season that all changed. Energy czar William Simon, who was a Lafayette College graduate by the way, wanted the United States to conform to the European standard of measurement for a variety of reasons.

The result was the late 1970s metric push, which he hoped would catch on with the American public. Major league ballparks painted distances to the fences in metric numbers and prior to the 1979 season, the U.S. High School Federation adopted the metric system for track & field.

That meant high schools had to spend money to change their track configurations from yards to meters. The U.S. Federation gave schools a two-year grace period to alter their tracks.

But the American public just never bought the metric system. It didn’t then and it hasn’t now.

Altering tracks not only turned into an unnecessary expense for school districts but it also raised questions about how the old linear records would be recorded. Do you retire the old records? Or do you convert the old times from yards to meters? Or do the pre-1979 times simply blow out the window like they never existed?