“I can look back on my career and say that, honestly, it never occurred to me that I lacked opportunity, because I was doing exactly what I wanted to do.”

It probably will come as a shock to those in the track & field community, but Francie Larrieu Smith has retired her running shoes. She doesn’t run anymore.

Oh, you’d better believe that at 67 years young, Smith still keeps active. She works out in other ways — biking and walking among them. But her knees scream at her when she tries to run, and she admits that she no longer finds the desire to push herself to what she always called “the zone of discomfort.”

Lord knows she’s earned the right to take a break.

When it comes to long distance running, Francie Larrieu Smith covered the “long” aspect of it and then some. She ran at an elite level for roughly a quarter-century, from the late 1960s to the early 1990s, and qualified for five U.S. Olympic teams. The last three of those Olympic experiences came while she lived and trained in her adopted home of Texas, and now she’s reached another, unanticipated finish line of sorts, as a member of the Class of 2020 for the Texas Sports Hall of Fame.

“It was unexpected. Let’s put it that way,” Smith said, describing the moment when she received the Hall of Fame call. “A Hall of Fame induction is something that you don’t expect. It’s a nice recognition. It’s an honor to be recognized as an athlete when you’re growing up and you’re performing and competing. You’re not thinking about whether or not you’re going to be inducted into a Hall of Fame.”

Before she was a runner, Francie was a fan. Her older brother Ron — who died in June at age 83 — established himself as one of the country’s top distance runners during Francie’s childhood. Ron won a pair of national titles in cross country, and competed in the 1964 Olympic Games in the 10,000 meters.

Francie cheered and clapped hard for her brother. But she also took particular interest in the women’s races.

Francie grew up in the San Francisco Bay Area, what is now known as Silicon Valley. She toed the line for her first competitive race at age 13, and before long was dusting girls her age and older.

Of course, this was the 1960s, pre-Title IX. High schools didn’t offer girls track & field teams at the time. Francie attended Fremont High School in Sunnyvale, Calif., and briefly enrolled in the girls’ sports class. But she had no interest in the three sports the class explored: basketball, swimming and field hockey. “I’m no good at hand-eye (coordination),” Smith said, laughing.

Instead, she ventured out to the track and trained with the boys. Fremont’s coach, Preston Doss, had worked with Francie previously, and invited her to work out with Fremont’s boys athletes. She even got the chance to run in meets.

“Nobody said boo about it,” she said. “I have since gotten wind that there were some conversations within the district about whether they would allow me to run. They did, but I couldn’t wear a uniform, that kind of thing. I didn’t care about that. All I cared about was going to those (AAU) races on the weekends, where I would race against other girls.”

She won more than her share of races. Francie claimed the AAU national title in the 1500 meters at age 17 in 1970, and would go on to win 22 national titles over her career. Funny thing is, she didn’t look the least bit intimidating when she stepped on the track.

“When I started developing a reputation, people would meet me for the first time and they’d say, ‘Oh, you’re the runner. How come you’re so little?’” Smith recalled. “And I’d ask my Dad, ‘Daddy, why do they say that?’ And he said, ‘Because people have a vision of female athletes, and they’re Amazon women.’ What he meant was big, bulky, muscular. I was just this skinny little thing.”

Smith joined the San Jose Cindergals, a girls AAU track & field team in the area. College scholarships were nonexistent for young women at the time, but she still attended Cal State-Long Beach and UCLA.

Below, Francie, U.S. Olympic Team flag bearer for the opening ceremony in Barcelona 1992: "probably the greatest honor of my life." 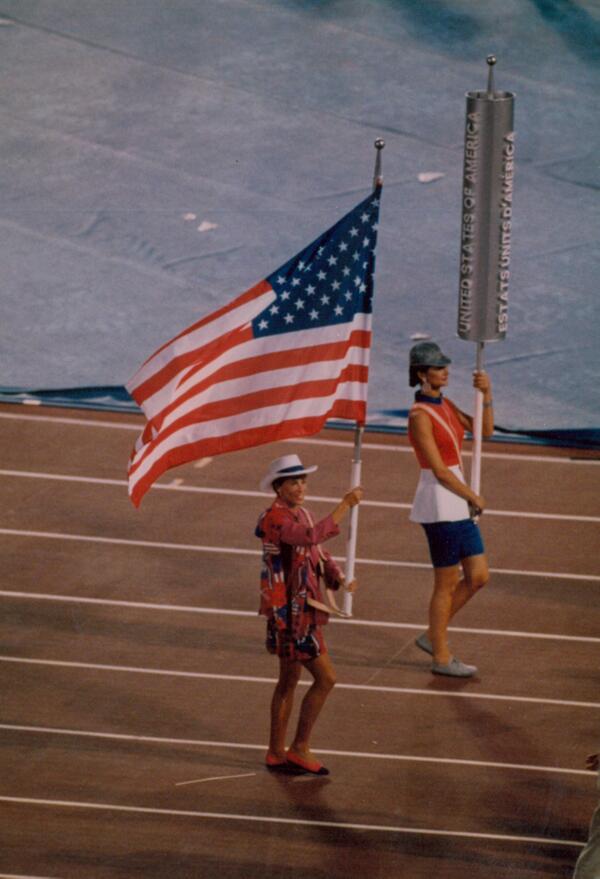