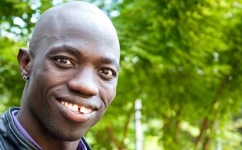 FLORENCE, Ala. – South Sudanese-born Olympic track-and-field athlete Lopez Lomong – one of the so-called “Lost Boys of Sudan” – will be the guest speaker for the University of North Alabama’s spring commencement at 10:00am Saturday, May 11, at Flowers Hall.

Lomong arrived in the United States in 2001 and became a naturalized U.S. citizen six years later. He went on to qualify for the 2008 Summer Olympics Track & Field Trials. Later that year, Lomong served as the flag-bearer for the U.S. during opening ceremonies for the Olympic games in Beijing, China.

“Now I’m not just one of the Lost Boys,” Lomong told reporters at the time. “I’m an American.”