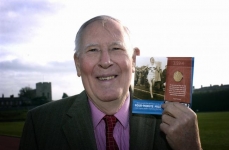 On Monday, March 4, the city will pay tribute to one of its most celebrated heroes, the neurologist who became the first person to conquer the sub-4 minute Mile.

Pembroke College, where Sir Roger became master in 1985, will use the occasion to announce the winner of its Bannister Scholarship.

Worth £1100, this is awarded annually to a student who demonstrates excellent all round performance in both academic & sporting activities.

All those who applied for the scholarship will attend an intimate event at the college with Lady Moyra Bannister, Sir Roger's wife, who will present the winner with a certificate.

Last November, the great and the good of university life gathered in the Sheldonian Theatre in Broad street to celebrate the life of the 88-year-old, who passed away on March 3, 2018.