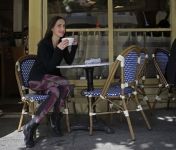 San Francisco is a city full of celebrities that no one recognizes. Or maybe it takes an insider to pick up on who they are.

Several months ago, a group of us Chronicle types were in line at a food truck. It took a business / tech writer to tip us off that a guy in another line was Jack Dorsey of Twitter fame.

Then there was the time my wife and I were eating at Farina in the Mission and Facebook’s Mark Zuckerberg walked through the restaurant. As near as I could tell, we were the only ones who noticed. Or maybe everyone was pretending not to notice.

With that in mind, we turn to Shannon Rowbury, the most famous San Francisco athlete you’ve never heard of. Rowbury has raced before 90,000 fans (and an international television audience) in two Olympic Games, but generally walks the streets of her hometown without a flicker of recognition — even if she’s wearing her trademark hot pink lipstick.

“I think that is one reason people like San Francisco more than Los Angeles,” she said at a sidewalk cafe on Union Street. “You go to L.A. to be seen, where in San Francisco you can blend in a little bit.”

An elite international athlete who turned professional in 2007, Rowbury, 30, spends her summers, from July to September, traveling from meet to meet in Europe on the track-and-field circuit. It’s not a bad gig, and it’s lucrative enough to have financed a condo near Dolores Park.