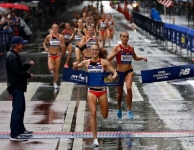 NEW YORK — The USA’s Jenny Simpson raced to her record-extending 7th win and Great Britain’s Jake Wightman picked up his first victory at the New Balance 5th Avenue Mile under a steady rain on Sunday as 19 Olympians raced down Manhattan’s most famous thoroughfare.

In the world’s longest running road Mile race, 32-year-old Simpson won for the sixth time consecutively, holding off her competition in the final steps by four tenths of a second to clock in at 4:18.8, the 10th fastest women’s time in the event’s 38-year history.

“I love that this race is American-made right down 5th Avenue, and I love that where I’m best known is here at home,” Simpson said. “Being a seven-time winner is very special to me.”

The USA’s Colleen Quigley, 25, finished second in a personal-best time of 4:19.2, recording her second podium appearance in the 2018 NYRR Pro Racing Series after winning the NYRR Wanamaker Mile in February. Great Britain’s Melissa Courtney, 25, was third, also notching a personal-best time of 4:20.2. In addition, a record-tying 17 women went sub-4:30 in the same race (also 2016 event).

Wightman, 24, won the men’s race in 3:53.5, well exceeding his seventh and 16th-place finishes at the event the past two years. New Zealand’s Nick Willis, 35, who was aiming for his record-breaking fifth event title, was the runner-up in 3:54.2, while Great Britain’s Neil Gourley was third in 3:55.3 in his road Mile debut. Rising star Eric Avila was top American in fourth, clocking 3:55.5.

Full results and coverage from the 5th Avenue Mile can be found at: nyrr.org