The Ancient Roman Reason Why There Are 5,280 Feet in a Mile 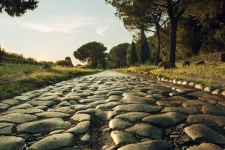 The British codified the iconic distance, tied to the furlong, in the 16th century

Nearly every country in the world uses the metric system as its official system of weights and measurements. Yes, fellow Americans, we are among the exceptions to this rule, but there’s no use crying over a spilt liter of milk. The customary system has its own cool history, well, one unit of the customary system does: the Mile.

According to Mental Floss, the modern Mile has origins in Roman antiquity. The term “mile” is derived from the Latin mille passum, meaning “a thousand paces.” A pace, in Roman times, was equivalent in length to five human feet lined up from toe to heel. Romans happened to be a bit smaller than modern humans, so 5,000 Roman “feet” would equate to about 4,850 modern human “feet.” That means the entire road system of the Roman empire (moer than 250,000 miles of roads) consists of over 1.25 billion “feet.” (Here’s what the ancient Roman roads would look like as a subway map—it’s pretty epic!)

While the basis of this measurement was Roman, the jump of 280 feet was positively British. In 1592, Parliament wanted to standardize the measurement of the Mile and made the decision that it should be equal to eight furlongs. Furlongs, which are still used as a unit of measurement in horse racing, are 660 feet long. 660 times eight equals, you guessed it, 5,280.

Without Romans, there would be no name nor baseline for the Mile. Without the British, it might be a more rounded length.