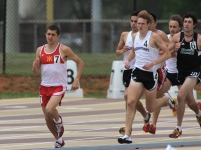 "The Mile is something that means a lot to a lot of people... every city should have a Mile event... sprinkled across the country so that people could participate in the Mile every week if they wanted to.”

Donnie Cowart glanced at the clock across the field at Meredith College before thrusting both arms in the air as he crossed the finish line. It was just 48 hours earlier that he woke up feeling sick and unable to eat, but after running one of the best races of his life at the Sir Walter Miler in Raleigh, N.C., last year, Cowart could hardly stop smiling.

He had just become the 425th American to run a sub-4 minute Mile.

“It really didn’t hit me until a couple days later,” Cowart said about running the Mile in a personal record time of 3 minutes, 58.43 seconds. “I was like, ‘All right, you really did that and it can’t be taken away.’”

Cowart, a standout runner at Virginia Military Institute from 2004 to 2009, will be one of the elite runners lining up Sunday morning on Pennsylvania Avenue for the inaugural The Navy Mile in Northwest Washington. The Bring Back the Mile featured event, which benefits the Naval Sea Cadet Corps, the Safe Harbor Foundation and the Navy Memorial, will kick off the U.S. Navy’s 240th birthday week.