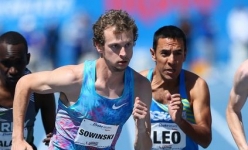 The men's Mile and women's 1500 meters are set to feature some of the top runners in the world as part of the Drake Relays presented by Hy-Vee, Blake Boldon, the Franklin P. Johnson Director of the Drake Relays has announced. Both races will be contested on Saturday afternoon, April 27.

The men's Mile, which has seen 34 competitors break the coveted 4-minute mark in Drake Stadium history, has six competitors who have previously run a sub-4 minute Mile slated to compete this year.

Fans will have the opportunity to cheer on many Relays regulars during their four laps around the Blue Oval including local talent Erik Sowinski. The University of Iowa standout made his Mile debut at the Drake Relays last year and finished fifth in 4:01.44. The three-time USA champion was the bronze medalist at the 2016 World Indoor Championships in the 800 meters and has been in the finals in each of the last 13 USA Championships with seven indoor finals appearances and six outdoors.

Daniel Herrera, who finished seventh in last year's Drake Relays Mile, also returns to the Blue Oval, as does Harun Abda. Abda was who was sixth at the 2018 USA Indoor Championships in the 800 meters and a 4-time Drake Relays champion while competing for Minnesota. Another collegiate standout, Chad Noelle, also returns to the Blue Oval to join the Mile field.

Rising stars Shannon Osika, who was fourth at the 2019 USA Championship in the indoor Mile is also in the field as is Hannah Fields, who is coming off a fifth-place showing in the 1000 meters at the USA Indoor Championship.

Alexa Efraimson, one of the sport's top young talents and the American junior record holder in the event, returns to the Blue Oval after finishing fifth in last year's 2-mile event and sixth in the 1500 meters in 2017.

Completing the field is Alexina Wilson, who was an Iowa state champion, Grace Barnett, Heather MacLean, Dana Mecke, Ashley Stinson and Savannah Camacho-Colon. The group has a total of seven NCAA All-America honors to their credit.

Many of the competitors in the Mile and 1500 meters will also compete in the Grand Blue Mile as well. This year, the 10th Grand Blue Mile, in partnership with Wellmark Blue Cross Blue Shield, is also serving as the USA Road Mile Championship and the first stop on the BBTM Grand Prix Tour 2019.

All-session, multi-session and single-session tickets for all of the action are available via DrakeTix.com, (515) 271-3647, or visiting the Drake Athletic Ticket Office.