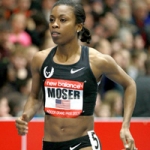 Treniere Moser, the USA 1500 meter champion from 2005 to 2007, came into the 2012 U.S. Olympic Trials needing an Olympic ”A” standard and a top three finish to earn a trip to London. “It was a little daunting,” she remembers. “In the final, I got together with Brenda Martinez and we decided to try and take it out to make it a decent honest-paced race. But after three rounds, and the emotional rollercoaster of the Trials, it’s just hard to keep that pace going. I went for it and it just didn’t work out." She finished 11th.

Moser, the former Treniere Clement, was 30 (and now 31), with a terribly stalled middle-distance career. She’d run 4:03.42 for the 1500 in 2006, but from 2009 to 2011 she was stuck in the 4:07 zone. After that, Moser, admits, “I wasn’t sure what I was going to do, if I wanted to continue running or not. Life kind of evolved. My husband, Paul, ended up getting a job in Portland. I felt I’d go to Portland and see what happened, and literally, as soon as I moved here, Alberto Salazar approached me.”