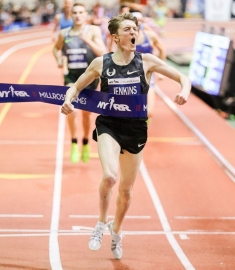 
Eric Jenkins, on December 5, 2020 in Los Angeles, stepped up in distance and won the Track Meet 10,000 meters, clocking a personal record 27:22.06, #9 on the all-time U.S. list and also earning the Tokyo Olympic Games qualifying standard.

Eric finished an impressive 4th in the 5000m at the 2016 Olympic Trials, however two of his most notable professional wins came when he has stepped down in distance to race the Mile. At the 2016 NYRR 5th Avenue Mile he ran 3:49.4, just edging Rio Olympic 1500m champion and teammate Matthew Centrowitz at the line for the surprise win. Also in New York City, at the 2017 Millrose Games, Eric won the prestigious Wanamaker Mile crown in a time of 3:53.23, a personal track record, world leading time and #10 U.S. male indoors all-time.

Jenkins first broke the coveted 4-minute Mile mark as a sophmore at Northeastern University, running 3:59.18 at the 2012 BU Valentine Invitational. In the summer of 2013, he transfered to the University of Oregon where he helped lead the Ducks to an NCAA Indoor title and two NCAA Outdoor titles. As a collegiate athlete Eric had success over a wide range of distances from earning USTFCCCA Honorable Mention All-American in the 1500m as a true freshman to finishing 10,000m runner-up at the 2015 NCAA Outdoor Track & Field Championships his senior year.