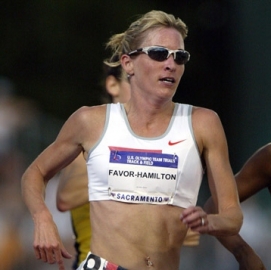 
Suzy Favor Hamilton, in 2022, the Wisconsin grad was one of 30 inductees into the inaugural class of USTFCCCA’s Collegiate Athlete Hall of Fame.

Over the course of her career, Suzy ran sub-4 minutes in the 1500 meters five times, and her 3:57.40 equals #5 American woman all-time for the metric Mile (only Shelby Houilhan, Shannon Rowbury, Mary Slaney and Jenny Simpson are faster).

Details about the book, to be published by...

Suzy Favor Hamilton had trained her entire life for this moment. She'd...