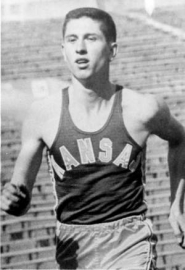 
Wes Santee  was an Olympian in the 5000 meters at the Games in Helsinki 1952, but he is best known for his efforts in the Mile and 1500 meters. Santee was one of a select few who were chasing the sub-4 minute Mile barrier before it was achieved in 1954 by Roger Bannister of Great Britain.

FUN FACTS: Born in Ashland, Kansas, Santee, because of his running prowess, was nicknamed the "Ashland Antelope" and his other nickname was "The Kansas Cowboy". His first name is "David".

Attic Salt: a look back

I didn’t matter what the seconds were. Bannister was under four minutes.

By Ed Cullen, The Advocate

Roger Bannister, who ran the first sub-4 minute Mile in history in 1954, was the hero of high school middle distance runners in the 1960s.

Where Are America’s Milers?

A stirring tradition of U.S. distance running is dying on the vine. What are the reasons, and what should be done to bring it back?

The most extraordinary thing about the once elusive 4 minute Mile in recent weeks has been the almost casual manner in...

This is the story of a foot race destined to go down in track history as the Blackstone Mile—the only race in the memory of even the oldest AAU official (and not even the...

Gunnar Nielsen won the famed Mile and set a world record of 4:03.6 in doing it, but hardly anyone noticed, for behind the Dane, Wes Santee and Fred Dwyer were wrestling each other down the stretch

NEW YORK - There are those who say it was the best running...