5 Things We Learned From Katelyn Tuohy, the New Collegiate Record Holder in the Mile 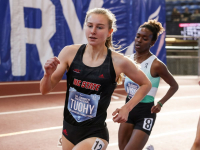 NC State star clocked a 4:24.26 Mile at Dr. Sander Invite to top Jenny Simpson’s indoor and absolute time in the event from 2009

Going into the track season, one of Katelyn Tuohy’s goals was to break a collegiate record, but she didn’t expect it to be in the Mile.

On Saturday, January 28, the North Carolina State sophomore broke the indoor and absolute NCAA record in the women’s Mile by finishing third in 4:24.26 at the Dr. Sander Invitational Columbia Challenge. The meet took place at The Armory in New York City, where the two-time NCAA champion broke the 4:25.91 previous record set by Jenny Simpson (née Barringer) in 2009.

The 20-year-old put herself in position for a historic time by competing alongside some of the nation’s top pros. After leading wire-to-wire, Alicia Monson won in 4:23.55 and Whittni Morgan finished second in 4:23.97. Both runners entered the top 10 U.S. all-time list with the 8th and 10th fastest times ever. Tuohy’s mark is now 13th on the list.

The performance builds on a stellar year for the former high school phenom. Last fall, Tuohy led the Wolfpack to a team title when she won the individual crown at NCAA Cross Country Championships in Stillwater, Oklahoma.

A few days after the record-breaking run, Runner’s World caught up with Tuohy to discuss how she honed her confidence ahead of the personal record, the goals she’s targeting, and the lessons she’s taking away from the experience. Here’s what we learned:

#1 The record happened in her first Mile in years
As the defending NCAA outdoor champion in the 5000 meters, Tuohy imagined she’d break her first collegiate record in her signature event or the 3000 meters. “I’d still like to take a shot at the 3K and 5K, I thought that would be more my range, because we don’t run miles every often, like that was my first Mile I’ve ever run in college,” she said.

While some time had passed since Tuohy competed in the event, she was poised for a big jump. In high school, she set four national records, including the outdoor Mile record of 4:33.87 in 2018. Last May, she ran 4:06.84 in the 1500 meters, which showed how much her speed had improved in the event. On her way to setting the collegiate record on Saturday, she split 4:06.49 for 1500 meters.

#2 She drew confidence from a key training session...
The record wasn’t a surprise to Tuohy, though. About a week and a half before the race, her coach, Laurie Henes, had her run a 1200 meter time trial. In practice, she split 3:16, about 4:22 Mile pace, which gave her a boost of confidence. “We knew I was fit enough to break the record and going into it, it wasn’t a record attempt but it was in the back of our minds, like definitely not out of the picture,” she said.

#3...and from local support.
Tuohy’s hometown of Stony Point, New York, is about an hour driving distance from the Big Apple. So her entire family plus her high school coach cheered her on at the Armory, where the three-time NXN champion added to her legacy.

“I went in there thinking, ‘This is my home track. I’ve raced there so many times,’” she said. “I was pretty relaxed going into it.”