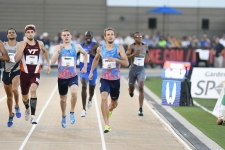 When I finally learned what my time was one of my (VT) teammates started to hug me. It was an incredible moment.

By Jean DePlacido, The Salem News

Drew Piazza keeps getting faster and faster. The Virginia Tech senior from Danvers has had an incredible summer including running a sub-4 minute Mile at the Men's Elite Division Sir Walter Miler at Meredith College in Raleigh, North Carolina on Friday, August 4.

Piazza began running track at Danvers High and spent three years on the track team at the University of New Hampshire before becoming a Hokie. His NCAA eligibility is over, but he will still train with the team under the guidance of coach Ben Thomas while finishing his degree in civil engineering this year.

At the Sir Walter Miler, he finished in 3:59.03 for sixth place, his first time under 4 minutes in an event that he doesn't even consider his best distance.

"It's been a crazy ride. I've always been a middle distance guy, mainly 800 meters, but coach Thomas said he wanted me to do that Mile event," said Piazza. "I was so happy when I found out what my time was. When it was over I was in the infield and couldn't see the board so had no idea of my time. I kept asking people if I broke four minutes, and kept getting responses I probably did. When I finally learned what my time was one of my (VT) teammates started to hug me. It was an incredible moment."