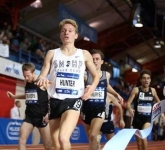 The New Balance Games takes place over two days, January 20-21, and is one of the largest Armory meets of the year. The 19-year-old from Purcellville, VA will run against an elite Mile field nearly a year after he broke Alan Webb's national high school indoor record at the 2016 Armory Track Invitational. Hunter drove his record time even lower at the 2016 NYRR Millrose Games, clocking 3:57.81.

D.J. Principe, Jr., a Stanford-bound high school state champion from Rhode Island, will also be in the men's Mile field with Hunter, eyeing his first sub-4. The senior from La Salle Academy ran 4:04.47 in the Mile on Dec. 31, 2016.

In addition, Olympian Ajee’ Wilson will run at The Armory for the first time this winter in the 600 meters. Wilson is the #2 American all-time in the event. Wilson opened her indoor season by running a fast 2:42.71 in the 1000 meters.

The New Balance Games will be broadcast live via RunnerSpace + Plus. Saturday’s Opening Ceremonies begin at 1:30pm. Visit ArmoryTrack.com for more event information.