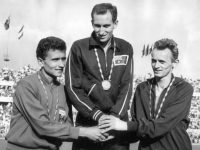 For four years they’ve been preparing themselves to answer it. But they won’t know their response until it’s too late to change their mind.

In 1960 Herb Elliott experienced how confronting that question can be. It was put to him during the race of his life, the 1500 meter final at the Rome Olympics.

Surprisingly, despite the occasion, he wasn’t as fit as he should have been.

“In 1959 I went to Melbourne University to prepare myself for a scholarship at Cambridge, and then I got married,” he recalls in a rare interview. “I found those two things a total distraction from my preparation.

“So I started training for the Olympics three or four months later than I should have. It meant I went to Rome probably the most vulnerable in my athletics career.”

Elliott was just 22, but his name already echoed around the sporting world. In 1958 he ran the 1500m in a spine-tingling 3 minutes, 36 seconds, obliterating the world record by more than two seconds.