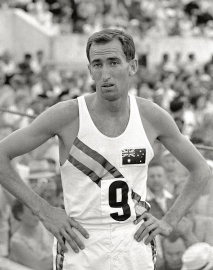 
Herb Elliott of Australia had a relatively short, but incredibly historic racing career (1957-62) and many in the sport consider him the greatest Mile athlete ever as the legend was only beaten once at 1500 meters (as a junior athlete) and went undefeated in the Mile (36 victories with 17 sub-4 minute performances).

His international breakout year was 1958 when Elliott won gold medals in the 880 and Mile at the Commonwealth Games in Cardiff, and then, a few weeks later on August 6 in Dublin, he shattered the Mile world record by 2.7 seconds, clocking 3:54.5, and later on August 28 in Göteborg, the AAU Mile champion also set the 1500 meter WR with his 3:36.0. For his spectacular year, Elliott was selected as the Male Athlete-of-the-Year by the Associated Press.

At the 1960 Rome Olympics, Elliott capped his stellar career as he dominated the 1500 meters to win gold and also set a rare world record at the Olympics, running 3:35.6.

Post-track career, Elliott worked as the CEO of Puma North America and also served as Director of Athlete & Corporate Relations for the Australian Olympic Committee.

FUN FACT: His coach was the eccentric, mystical Percy Cerutty who put his athletes on a special diet of grains & fruit and created a stoic training camp at Portsea, Australia for his charges to “embrace the pain”.

FUN FACT III: In the Queen Elizabeth II's Birthday Honors List of 1964, he was appointed a Member of the Order of the British Empire (MBE).

It was simply the most significant race ever run in Ireland, despite the intrusion of a black and white mongrel dog midway through the race, and it lived up to its billing to the letter.

By Peter Byrne for The Irish Times

In an extract from his forthcoming book Winning for Ireland, Peter...

Herb Elliott will always be best remembered for his world record-breaking run to win the 1500m at the...

‘A Body Built on Pain’ – The Training of Herb Elliott

“In the winter and spring of 1957, I must have run 2,500 miles in training and lifted thousands of pounds in weights.”

For four years they’ve been...

The 1960 Olympic champion and Mile world record holder has spiritual depth to match his athletic ability.

Herb Elliott, who dominated the 1500 meters at the 1960 Rome Olympics, theorises that if life is a race, it is best to focus on personal perfection...

Who is the ultimate Supermiler?

As the 60th anniversary of the first sub-4 minute Mile approaches, tell us who you believe to be the leading Miler of all-time

Roger Bannister’s 3:59.4 Mile of almost 60 years ago is one of the most revered performances in athletics history.

Being the first man to run...

On a primeval, wind-swept beach at Portsea, a curling tongue of scruffy Cape Cod land 60...