I remember being on fire crossing the finish line, as if I didn’t want to stop running.

I was barely 18 months old when Roger Bannister became the first person in the world to run a sub-4 minute Mile on May 6, 1954. This historic achievement still resonates 64 years on. Sadly, Sir Roger passed away last month with his legacy immortalized forever more.

My early childhood recollection of this achievement came about from watching re-runs of the famed race on the Pathe News in the Star cinema Crumlin in Dublin. It was a huge deal, a massive breakthrough for mankind and something we couldn’t fathom as children.

When my career in athletics developed as a 12-year-old running around the streets of Dublin, little did I ever think that eventually I’d become the first person to record a sub-3:50 Mile indoors, or the first person over 40-years-old, a Master, to run a sub-4.

I had the pleasure of meeting Sir Roger on many occasions. There was an aura about him always. I didn’t know what it was, but you could feel it somehow! It was same tingling feeling I got as a kid in awe of his run in Iffley Road in the Star cinema all those years ago. And now, I get to meet him, my hero in person. My high school coach Gerry Farnan always wanted me to aspire to be like Bannister, to be a pathfinder, to create milestones.

The sub-4 minute Mile is the benchmark all middle-distance athletes athletes understand and would love on their running resume. It’s the barometer that indicates how good a runner you really are. It means you are world class. Many more people have climbed Everest (4,000) than have clocked a sub-4 (just over 1,500)!

I vividly remember my first. Not the “official first” one, 3:56.2, at Panther Stadium in Pittsburgh on May 5, 1975, but the “unofficial” one at the 81st Penn Relays a week earlier. For me, it was official enough!

In 1974, I’d been hovering around the 4 minute mark, while enjoying success, falling short by inches. I set my 1975 goal to break the 4 minute barrier and was even brave enough to write down a 3:53.6 time on the back of the mirror in my Villanova University dorm room.

I always remember Jumbo Elliott, our legendary coach say: “Learn to win races, and your times will always come with the wins. Don’t chase it. And, when you do it, you’ll break the mark by three, four seconds”. I was in no rush, though the guys on the team would always ask: “When will you do it Eamonn?" I never allowed my intentions be known. I believed Jumbo and I preferred to allow my running do the talking!

My aim was to do it at the Penn Relays when my Dad would be over from Ireland to see the meet. I wanted him to witness the occasion at the famed relay Carnival. Penn would provide the ideal atmosphere, the knowledgeable fans, the pressure, the huge Villanova support and the expectation to perform. We had a tradition to maintain and I’d be running the anchor Mile leg in the Distance Medley Relay going for our tenth consecutive win. It was a responsibility we had as a team to live up to. Villanova had a great team made up of Ken Schappert, Greg Eckman, Tom Gregan and me.

Three of us jokingly spoke about the relay the day before in our Public Speaking course. We agreed silently that the world record was achievable, and that we’d tell Eckman of our plan the next day just before the race. I believed we would, and we were confident when analyzing the other teams. Besides, our Professor Mr. Wilkie, a track nut, promised to buy us a beer if we did it! We’d get as much pleasure holding him to that promise!

Arrival to Franklin Field on Penn Relay race day can be daunting. The nerves can play havoc, the organized chaos of athletes warming up, non-stop races on precise time, loud cheering fans and people running aimlessly all over the place can either excite or frighten the life out of you. We were excited and we were concerned about Manhattan College, with star athlete Tony Colin, a former classmate of Schapp’s from the Bronx. There was Princeton with Craig Masback, Arizona State and Tennessee all gunning for the title and beating Villanova.

It poured rain out of the Heavens all day, but it eased up somewhat in time for the DMR Championship of America. We huddled around a nervous Jumbo under the stands by the start zone corral. He reassured us that we are Villanovans, and Villanovans are winners, nothing less. That we are fit, ready to run, to be tough and don’t do anything stupid, like drop the baton. And to keep the pressure on throughout the race.

The race started and you could feel the anticipation from the fans in the humid air. Schapp led off and covered the 880 yards in 1:49.9 holding off Princeton’s Charlie Hedrick to give Eckman a three-yard advantage over the field. He nervously cruised his lap in 46.7 slightly ahead of the fast closing Arizona State Herman Frazier’s 45.3, with Dave Lopp of Tennessee right there too. Princeton were displaced to fourth, while one of the pre-race favorites Manhattan College dropped to fifth place.

Gregan took over for the 3/4 mile leg. He maintained a five-yard lead throughout, covering his three laps in 2:55.6, the same time exactly as Ray Wicksell of Arizona State in second place. Arizona State was now our only threat as the other teams faded badly.

It was now my turn. The DMR world best of 9:31.8 was held by Kansas since 1972. I felt it in my blood that we were in with a good shout of breaking it as I took off. The last thing on my mind was breaking the 4 minute Mile barrier. I was thinking, relax, sit and kick, to win the race, let the time come and save myself a little for the 4 x 880 two hours later and the 4 x 1 Mile the following day.

Larry Lawson of Arizona State ran right on the back of my heels as if to intimidate me or just let me know he was close by. I decided to keep the pressure on through the first lap to see how’d he react. There were no splits given for either of the three laps I passed through. I hadn’t a clue of the time. All I knew was that it was fast. It was almost mysterious in a way, and Lawson continued to stick to my shoulder.

The track was very wet. It felt like a sponge underneath giving me a nice soft bounce. I felt great. It was cool from dampness, splashes of water all over my shorts and vest. I didn’t mind as it was a refreshing feeling. I was on a high. With a lap to go I could hear Schapp and the boys beckoning me on from the infield: “The record is on, run your ass off Eamonn, Go, Go, Go!”

I began to sense Lawson was finding the going tough. It was time to punish him. I pushed away confidently on the penultimate straight to open a big lead. He didn’t respond, his legs were shot. From the stand entering the home straight I could hear the shrill voice of my Dad, “you’ll break it”. Then I knew the record was safe.

I remember being on fire crossing th 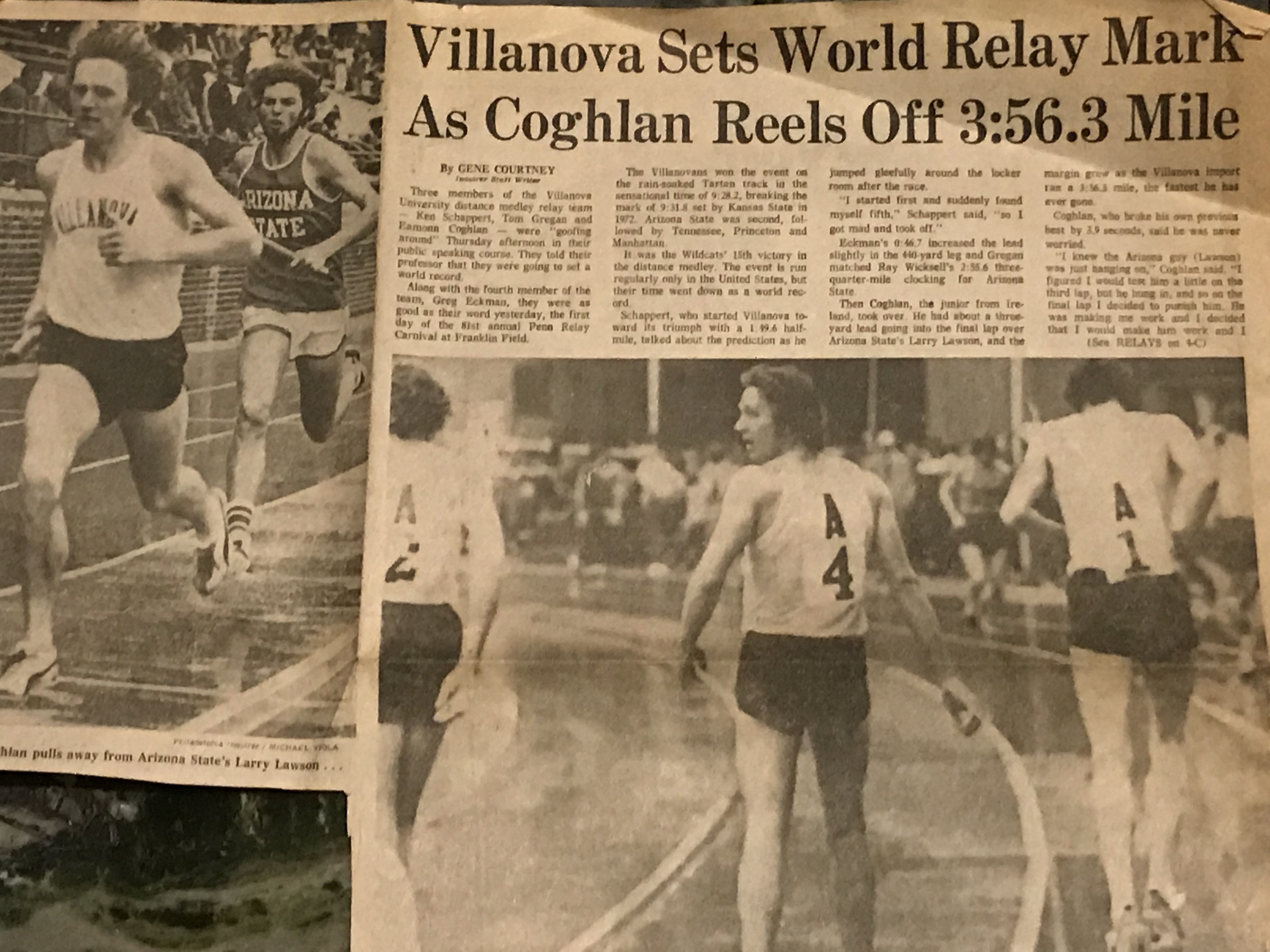 e finish line, as if I didn’t want to stop running. We were delighted to win Villanova’s 10th in a row, running 9:28.2 to shatter the record. I had no idea of my split. “You broke four“ I heard unofficially from a few bystanders with watches in hand as we did our lap of honor. But by how much I wondered. It was only when famed track announcer Jack O’Reilly, the voice of Penn Relays, confirmed over the loudspeaker, “Ladies & Gentlemen, the Mile anchor split for Coghlan, was 3 minutes, 56 point 3 seconds”, the goal I wanted to achieve most was accomplished. I was in disbelief because it seemed so easy! That very moment I knew I reached a new plateau in athletic. It was the happiest moment in my young career. The next day I ran 3:59 in the 4 x 1 Mile.

While the Pitt Invitational Mile in Panther Stadium is recorded as my first official one, I can’t remember it at all, not even the splits. The time was 3:56.2 a mere one hundredth of a second faster than the Mile leg at Penn. It was less important for some reason: no hoopla, no celebrations, no fanfare. I do recall doing the double, winning the Mile and an hour later winning the 3 Mile in 13:35, both stadium record times.

What’s more memorable about that occasion was getting stopped on Interstate 80 by a State Trooper for speeding on the way back to school. Jumbo had asked me to drive and to hurry up! When asked for my license the trooper noticed it was Irish. He looked at it, questioned its authenticity and asked: “Are you the kid from Ireland who just broke the 4 minute Mile in Pittsburgh? When I confirmed yes, he politely told me to “keep your speeding for the track” and let me off on my merry way free of charge. I think he was of Irish descent! 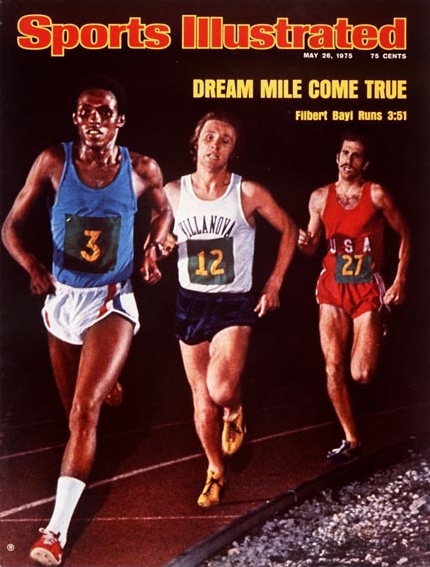 Later on May 17, I finished third in the Dream Mile at the Martin Luther King Games in Kingston, Jamaica running 3:53.3 to break Frenchman Michel Jazy’s European record (and also of course, the Irish record). Frontrunner Filbert Bayi of Tanzania won in a world record 3:51.0 with American Marty Liquori second also in a PR 3:52.2.

The time I wrote on the mirror was surpassed, and I realized dreams – coupled with hard work – do indeed come true. My Dad subsequently confirmed in a later conversation that he was referring to my first sub-4 time being on, when roaring me on as I passed him on that last corner in Penn. Just like I planned.

EDITOR’S NOTE:  Eamonn Coghlan, a three-time Olympian and 5000m world champion, had an impressive Mile career. Known as “The Chairman of the Boards” for his indoor racing prowess, Coghlan set the indoor Mile world record three times including the first sub-3:50 under the roof in 1983 (his 3:49.78 ranks the third fastest indoor mark all-time).

Since his retirement, Coghlan has stayed active in the sport as an ambassador, and the former Irish Senator enjoys playing golf.

FUN FACT: Eamonn & his son John are one of only 13 father / son combinations that have broken the coveted sub-4 minute benchmark for the Mile.