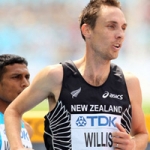 Your racing plans seem to be pegged to your upcoming fatherhood.  When are you due to become a dad?

Nick Willis: June 28 is the due date. That’s how I’ve talked about it, but truth is, we wanted to return to an approach that worked specifically in 2008 in the Beijing Olympic year. We’re fortunate to be able to have the baby in a period when I’ll have a back-off from racing.