Q and A: Galen Rupp, The New Magnificent Miler 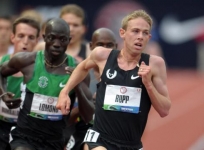 BOSTON, Mass. - Galen Rupp on Saturday became the fifth-fastest indoor Miler in history—behind only Hicham el Guerrouj, Eamonn Coghlan, Bernard Lagat and Noureddine Morceli—when he ran 3:50.92 at the Boston University Terrier Invitational. Just 1.4 seconds faster and Rupp would be the new American Record-holder. Not bad for a distance dude.

After a few days back home in Oregon, Rupp will return to Boston to compete at the New Balance Indoor Grand Prix. Last year, Rupp finished third in the Mile here in 3:57.10 after barely avoiding an early-race collision that took down his training partner, Mo Farah.

This year, Rupp will run the 3000 meters, and his coach, Alberto Salazar, sounds as if he’s expecting something special. “I think he’s ready to run a great 3K,” he said. “His workouts have been incredible.  I’ve seen him do workouts I’ve never seen or heard of before, so I knew he was ready to run a real fast Mile.”