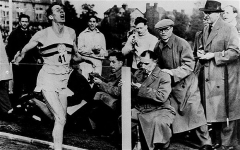 Before hanging up his running spikes last year, Patrick Todd did something that earned him life-long membership in an exclusive club: He ran a sub-4 minute Mile. "It was one of those wild fantasies," Todd said shortly after the 2011 feat.

It was 60 years ago next week that the Englishman Roger Bannister became the first runner to break the 4-minute barrier (under recorded conditions anyway), and the accomplishment remains rarified. No woman has done it: The female Mile record, set by Russian Svetlana Masterkova, has stood at 4:12,56 since 1996. Only 420 U.S. men have run the Mile under 4 minutes, starting with Don Bowden in 1957, and at year end only 1,303 men worldwide had done so, according to Ryan Lamppa, founder of Bring Back the Mile, a group devoted to restoring a distance that in many track meets has been replaced by the 1500 meters.

But growth in that club is surging. A Track & Field News by-year list of American Milers who have broken 4 minutes shows that in 2012 the number reached 23—a record that was repeated in 2013. That may reflect a small increase in the number of meets featuring the Mile. But also relevant is that the public—which has no idea what constitutes an elite 1500-meter finish—still reveres the sub-4 minute Mile. "It's a way to open doors," says Todd, a 24-year-old real-estate analyst whose LinkedIn profile includes: "Sub 4 miler."