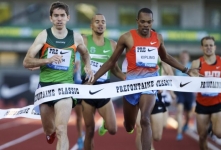 The former Winona Senior High School state champion and Stanford All-American spent the past several months living and training in Colorado Springs, Colo., where he hopes the thin mountain air will help him earn a spot on the U.S. national team.

He’s hoping the move to Colorado will help him get to Moscow, the site of the 2013 World Championship in Athletics.

“It’s the ultimate goal of the year,” Heath said.

Training in thin air increases the body’s red blood cell count — the same goal of blood doping, although Heath is doing it the natural way. Red blood cells transport oxygen to the muscles.

“The hope is when you go back down to sea level, you have a higher carrying capacity, and you are able to perform at a higher level,” Heath said. “You can monitor it, you can take blood tests, check your hemoglobin levels and track those to see if your RBC count is higher. But in the long run it comes down to how you feel.”

Heath said he feels great. And the results prove it.

On May 31, he won the 1500 in 3:38.54 at the Prefontaine Classic in Eugene, Ore., holding off a strong finish from Kenyan Jonathan Kiplimo and former Oregon runner Jordan McNamara. In April, he beat Olympic silver medalist Leo Manzano by .12 seconds in the USA 1 Mile Road Championships in Des Moines.

“I feel stronger at the end of races,” Heath said.

He then set a personal record in the 5000 meters (13:20.01) at the Payton Jordan Cardinal Invitational at his alma mater.

He hasn’t yet broken his personal best of 3:36.03, set last year, in the 1500. He posted a 3:38.54 in a strong headwind at the Pre Classic and a 3:37.47 at the Oxy High Performance Meet, a race that featured all of the nation’s top middle distance runners — including Manzano and another Olympic medalist Galen Rupp — but for some reason not the times many expected.

“Some of the pacing got changed up,” said Heath, who was in the lead pack near the finish. “The race didn’t play out like most people expected.