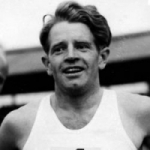 The UK's MarathonTalk podcast featured a two-part interview earlier this year with Sir Chris Chataway who paced Sir Roger Bannister to the first sub-4 minute Mile in 1954. Chataway went on to have a decorated career himself breaking the World 5000m record, winning Commonwealth gold over three miles, European silver over 5000m, and was the first-ever BBC Sports Personality of the Year in 1954 over Bannister!

They have also been asking all their interviewees what they could run a Mile off of six months of training. Mo Farah tops the charts saying he could run 3:48, Ryan Hall a couple seconds back in 3:55 and Coach Greg McMillan would get under four. See the full list for yourself at MarathonTalk.com.