HOKA ONE ONE presents the historic milestones, Mile events and U.S. Milers that headlined the year

Wow, what a year for the Mile as the storied distance had another noteworthy year of milestone anniversaries, exciting races, fast performances, records, new events, more prize money, major national media coverage and more. In 2014, the inaugural Bring Back the Mile Grand Prix Tour was launched, featuring six top U.S. Mile races across the country, and with two Tour wins and consistent racing, Jack Bolas and Heather Kampf earned the grand prix titles. Earlier in the year, HOKA ONE ONE became an official sponsor of Bring Back the Mile and later signed 2012 Olympic 1500m silver medalist Leo Manzano. In addition, fellow U.S. Olympian and 2011 world champion Jenny Simpson had a banner season, highlighted by the Diamond League 1500m (metric Mile) crown.

Here are the 10 best Mile moments in 2014 chronological order:

In Boston at the John Thomas Terrier Invitational, teen phenom Mary Cain crushed her U.S. Junior indoor Mile record by 4-plus seconds, clocking a historic 4:24.11 and just missing the Junior indoor world record by a scant .01 seconds. Cain also won the race and produced the fastest women’s track Mile time of the year. In addition, Cain (2013-14) and Jim Ryun (1965-66) are the only teenagers to have topped the U.S. Mile list for the year more than once. 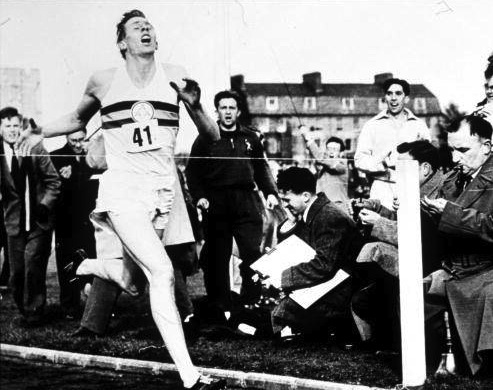 The 60th anniversary of the first sub-4 minute Mile (3:59.4) by Roger Bannister of Great Britain was widely recognized and celebrated worldwide. Put simply, Bannister is the man who made the mile, the Mile.

At America’s premier track meet, the Prefontaine Classic, the Mile again shone brightly as Ayanleh Souleiman of Djibouti won the Bowerman Mile, the final event, in 3:47.32 to set a U.S. All-Comers record as well as running the fastest Mile time of the year, and a six men also went sub-3:50 and 10 men sub-3:52 to produce the greatest Mile ever on American soil. Earlier in the day at the International Mile, Leo Manzano broke the beam for the victory in 3:52.41.

Night of Miles across America – June 5

The day was 50th anniversary of the first high school sub-4 minute Mile, 3:59.0, by legend Jim Ryun in Compton, Calif., and the country celebrated with a series of events including a spectacular Night of Miles in three time zones.

• At the Nike Festival of Miles in St. Louis, Jordan McNamara set meet and State records with his 3:54.27 in front of 2,000 rabid fans who pre-race were encouraged by McNamara to make some “noise”. They did, and he met their expectations with a crowd-pleasing performance.

• The Jim Ryun Festival of Miles in San Diego had a thrilling finish as Eric Avila beat fellow local Miler AJ Acosta, 3:56.89 to 3:57.05 with Jim Ryun holding the tape; it was also the first sub-4 for Avila. Both later qualified for the final of the outdoor USA 1500m Championships in Sacramento in late June.

Americans dominated the Morton Games Mile in Dublin, Ireland as Will Leer set meet and personal records with a 3:51.82 winning time to lead a USA sweep (also PRs were set by runner-up Patrick Casey, 3:52.62 and Cory Leslie, 3:53.44). In addition, the top 10 men ran under the coveted 4 minute mark, and most impressively, all 10 of them set PRs! For the women, Molly Huddle, 2012 U.S. Olympian, also took the victory with a meet record and PR of 4:26.84, while fellow Americans – Aisha Praught (third) and Lauren Penney (fourth) – also cracked the coveted sub-4:30 for the first time, and like the men, the top 10 women set PRs.

Running is often touted as the best, most efficient form of exercise, and a 15-year study of 55,000 people published by the Journal of the American College of Cardiology further validates this, but moreover, this comprehensive study showed “running may be a better exercise option than more moderate intensity exercises for healthy but sedentary people since it produces similar, if not greater, mortality benefits in five to 10 minutes compared to the 15 to 20 minutes per day of moderate intensity activity that many find too time consuming.” For many people, five to 10 minutes is the time window to cover a Mile. In other words, less is more.

At the GNC Live Well Liberty Mile on a warm Friday evening in downtown Pittsburgh, the 4th stop on the BBTM GP Tour 2014 ended in two down-to-the-wire finishes as Jordan McNamara of Eugene, OR and Gabriele Grunewald of Minneapolis, MN put on closing bursts to edge their respective fields, clocking 4 minutes, 3 seconds and 4:33, the latter just missing Queen of the Road Mile Heather Kampf’s event record of 4:32 set last year. And the crowd goes wild!

The inaugural Sir Walter Miler in Raleigh, N.C. drew approximately 1,000 spectators, who lined the Meredith College track and stood atop the grass embankment and were treated to the first sub-4 minute Mile (3:57.61) for Ford Palmer who prior had clocked several recent near misses. Also joining Palmer under 4 minutes were Donnie Cowart (3:58.43) and Isaac Presson (3:59.77). It was also the first sub-4 for Cowart and the second for Presson. Bravo! 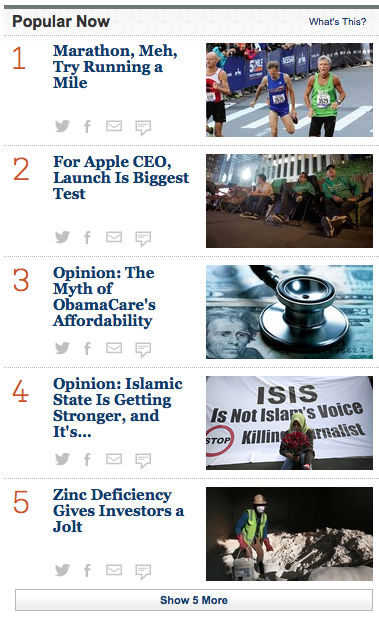 The Wall Street Journal, the country’s largest newspaper with a print circulation of 2.3 million, published an article on the Mile (second one in 2014), and the online version also had video and audio files. This feature article – “Marathon, Meh, Try Running a Mile” – was on the front page of the Personal Journal section, and for most of the day, it was the #1 read article on the WSJ website (the same day the Apple watch and iPhone 6 were announced - see right). In addition, for the week, this article was also quite popular on the WSJ’s social media, with well above average WSJ engagement (its Facebook post had 903 likes, 513 shares & 79 comments, while Twitter = 447 retweets & 349 favorites and 76 online comments).

The 34th NYRR Fifth Avenue Mile did not disappoint with two thrilling professional races on the storied thoroughfare. In the women’s race, defending champion Jenny Simpson held off Brenda Martinez, 4:19.4 to 4:19.6, to become the famed event’s first three-time women’s champion. In addition, a record 14 women went sub-4:30 in the same race – road or track. The men’s race came down to a blanket finish as 2014 Liberty Mile champion Jordan McNamara just edged fellow American Garrett Heath, both were timed in 3:51.0, personal bests. Fifteen men broke the 4 minute benchmark with four clocking sub-3:52. What a way to end the 2014 Mile professional racing season!

The IAAF, the international governing body, put the icing on the 2014 Mile cake by announcing the qualifying standards for the 2015 World Championships in Beijing, and for the first time for the outdoor Worlds, Mile times (3:53.30 – men and 4:25.20 – women) will be accepted to qualify for the 1500 meters. The last time Mile times could be used to qualify for the 1500m in a global championship was the 1972 Munich Olympics (men, 3:59.6 or faster). Hats off, IAAF!

For more on the Mile, the events, the athletes and its history, go to: bringbackthemile.com