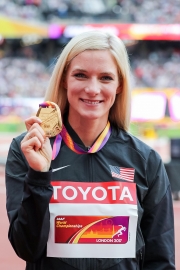 At the 2019 World Championships in Doha, Qatar, Emma captured the 3000m steeplechase silver medal (her third global championship medal), running a PR of 9:02.35.

FUN FACT: Coburn was one of the athletes featured in the 2016 ESPN Magazine Body Issue, and in 2021, she was named one of the 25 fittest female athletes in the world by Sports Illustrated.

The professional runners of Team Boss used their first racing opportunity in five months to not just break records, but also give back to the Black Lives...

7 Surprising Things That Happen After Winning an Olympic Medal

"The treasured, powerful symbol of athletic success was like hiding in my suitcase in a bundle of socks.”

Team USA’s track & field athletes are always expected to do well at the Olympics—and usually they tally a significant number of medals across the sprints...

Jenny Simpson and Emma Coburn each came out of the Rio Olympics with historic performances for the United States. Coburn won the...

Former NCAA champions for the Colorado track & field and cross country teams to be recognized at several events on Saturday, October 1

"They are waiting for the battle of St. Crispan's Day, and are outnumbered five to one. Sometimes this year, with wave after wave of scandal in our sport, it has felt as if we were up against impossible odds. But, 'She who has no stomach for this fight, let her depart ... .' "

"Along the way there are different benchmarks that you dream of and hope for and work for, and the gold medal at the Olympic Games is the superlative."

If there's one thing to be learned from an athlete's first Olympic experience, it is how to deal with the...

EUGENE, Ore. — Nine athletes with Colorado connections will represent the United States on the Olympic track & field team in Rio next month, with serious contenders to...

The Colorado senior, who made the final of the Olympic steeplechase last summer, talks about her sub-4:30 Mile, spring racing and her post-graduation plans

Who is the most dominant female collegiate distance runner today? That’s impossible to answer. But Emma...

"This was something I really wanted and the Mile is not my specialty. I wanted to really conquer this distance and I think I made a step in the right direction."