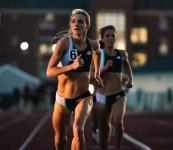 The professional runners of Team Boss used their first racing opportunity in five months to not just break records, but also give back to the Black Lives Matter movement.

On Saturday night, the Boulder, Colorado-based training group, which is led by coach Joe Bosshard, hosted the first-ever Team Boss Colorado Mile in an attempt to break the Colorado state records in the event. Olympic bronze medalist Emma Coburn did just that, shattering the women’s record by running 4:32.72 in Grand Junction, Colorado.

The runners took the competition a step further by using their platform as a way to support black high school students with their education. Team Boss created a Pledge It fundraiser, which asked for donations benefiting the Sachs Foundation—a nonprofit that provides college scholarships to black high school students in Colorado. By the end of the event on Saturday night, the fundraiser had more than $27,000 in donations, surpassing the initial goal of $20,000.

While adhering to social distancing restrictions, the women’s race kicked off the event on a live stream produced by FloTrack. Competing on Colorado Mesa University’s track, which sits at 4,583 feet of elevation, Coburn, Aisha Praught Leer, Dom Scott Efurd, Maddie Alm, Dani Jones and Cory McGee targeted the record of 4:36.05 set by Jones in 2018.

Marathoner Laura Thweatt, who finished fifth at the 2020 U.S. Olympic Marathon Trials, paced the runners through the first 800 meters in 2:18. The University of Colorado alum stepped off the track around the 1000 meter mark, at which point McGee took over up front.

For the next 500 meters, McGee led the top group of Coburn and Jones around the track until Coburn kicked past her training partners on the homestretch. The 2017 steeplechase world champion set a new record with a winning time of 4:32.72, almost improving on her outdoor Mile personal best of 4:31.08. McGee and Jones also bettered the previous record when they finished in 4:33.39 and 4:34.50, respectively.

The men’s field was organized as an attempt to break the record of 4:01.00 set by Colorado All-American Joe Klecker earlier this year.