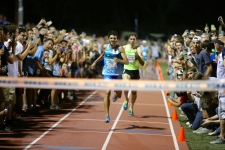 Are you ready? The HOKA ONE ONE Long Island Mile hits the track next week on Wednesday, August 31, 2016. In its debut, last year’s event saw 7 men eclipse the coveted 4-minute Mile mark, and 3 professional women battle down the home stretch in a photo finish. The track was on fire with David Torrence of HOKA ONE ONE taking home the men’s crowd in 3:53.91 (Watch Here) just narrowly missing the Long Island record of 3:53.39 set at the 1998 Goodwill Games by Noureddine Morceli of Algeria. On the women’s side, Amanda Eccleston of Brooks stole the show in the final meters with a 4:29.99 (Watch Here). Both of last year’s champions will return to defend their titles!

Following the excitement of the 2016 Rio Olympics, we are happy to welcome five athletes who will be racing on Long Island for their first competition following the games. New Zealand's Julian Matthews will once again face off against 1500m Olympians in Chris O’Hare (Great Britain/Scotland) and Charles Philibert-Thiboutot (Canada). With the addition of David Torrence (Peru) who competed in the 5000m last week and the 2012 London Olympic silver medalist at 1500 meters, Leo Manzano (USA), there will be six athletes with Olympic experience toeing the line.