A Week with The World’s Best Miler: Asbel Kiprop 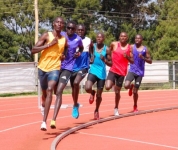 Three-time Bowerman Mile champion preps for 2016 Pre Classic at altitude: what I witnessed on Lornah’s track that day was the workout to end all workouts.

The 2016 IAAF Diamond League season is underway, with Sunday’s meeting in Rabat the third stop on the circuit. These 14 DL meets that span the globe attract the absolute best within the sport, and the importance of the Diamond League is not lost on Kenya’s top talent. A single victory can net an athlete vital income (it’s $10,000 for a win) and life-changing sponsorships, and the spectacular venues and disciplined rabbits allow many of the Rift Valley’s elites to run fast times early in the season, guaranteeing coveted spots in Kenya’s Olympic Trials. With Olympic dreams and financial success at stake, the world’s greatest runners use May as the time to ratchet up their training intensity with workouts that would make even Jim Ryun blush.

I have spent the past few weeks hanging around Iten’s various athletic facilities to catch a glimpse of track & field’s royalty putting in the hard work and posting some ridiculous training efforts. Two weeks ago, I witnessed Geoffrey Kamworor, and about 20 other members of coach Patrick Sang’s group, cruise 6 x 600 meters in 1:30 each, only to follow it with 10 x 300 in 39 seconds or better. Recovery was merely a 100-meter jog. This past Saturday, I joined Brother Colm O’Connell at Lornah Kiplagat‘s newly-constructed Tartan track to watch David Rudisha give new meaning to the word “speed.” A film crew from South Africa tried their best to have their drone keep pace with the Great One as he effortlessly clipped off 37-second 300s. But they gave up entirely when he started splitting 150 meters in 16 seconds flat. Brother Colm’s comments following the training made Rudisha’s speed work even more impressive.