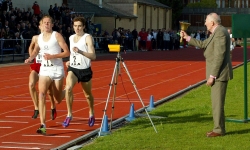 Sir Roger ran the world’s first sub-4 minute Mile clocking 3:59.4 in Oxford on May 6 and he was also founding president of the BMC.

The 2018 series kicks off with men’s and women’s ‘City Mile’ races at Lee Valley in north London on May 9 – just three days after the anniversary of Sir Roger’s famous feat.

The ‘City Mile’ has a long history and took place at Motspur Park in the 1960s and 70s. Former winners include Steve Ovett, who ran 4 minutes dead aged 18, but the event has now been incorporated into the Lee Valley meeting along with 5000m races.

“Sixty-four years on,” says the BMC, “can anyone match his time? History will meet innovation in this meeting on a night of 5000m races with music and much more.”

The series continues on July 7 with the Peter Coe Mile for under-17 men and Frank Horwill Mile for under-17 women. The BMC says: “Hosted in the BMC Grand Prix, this is a chance for some of the best young middle-distance runners in the country to compete over a Mile.”