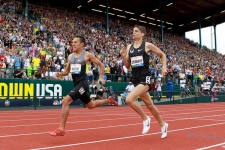 Two years ago, former track athlete Ryan Lamppa launched the movement 'Bring Back the Mile: America's Distance'. Here are FOUR reasons why he might just be getting somewhere.

"Here in America we eat, sleep and think in miles. Not kilometers. The distance is deeply embedded in our culture," says Ryan Lamppa. "We are not trying to insult the British by calling it 'America’s Distance'. Great Britain is the 'home of the Mile'."

"Jim said to me: 'One, it is a great idea, I like it. Secondly and most importantly: how can I help?'"

"Half of our Facebook audience are under-30, so young people get the Mile too,” says Lamppa. “The Mile is universally liked and people want to follow the Mile."