Can the Cal Ripken of Running Continue His Annual Sub-4 Mile Streak? 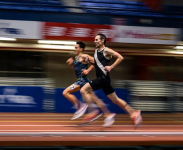 "This is a hard endeavor. The 4 minute barrier still means something, especially on 38-year-old legs.”

Over the course of five Olympics, New Zealand's Nick Willis became a track & field legend. Now, at 38, he’s trying to complete an unprecedented feat: breaking the 4 minute Mile for a record 20th straight year. GQ goes trackside to witness his attempt at history—and uncover the secrets to his remarkable longevity.

It was as surreal as it was unlikely, this attempt at history. On New Year’s Eve in New York City, as a scoreboard above the Armory Track counted down the minutes until 2022, and as a film crew and photographer shadowed his every move, Nick Willis gathered himself for the impending effort. Get your head into this, Nick, he told himself. He slapped his face and legs, giving his body a jolt of adrenaline. His brown hair was cropped short, his 6’ frame was as angular and lean as ever. Unlike his previous races on this famous track, this time the stands were empty. Willis’s youngest son, age 3, was playing in the long jump sand pit. What had been planned by Tracksmith, the running brand, as a gala—part New Year’s Eve party, part track meet, with Willis’ Midnight Mile as the featured attraction—had, because of Omicron, turned into a private affair, with only his family, coach, teammates and a few Tracksmith employees and their children on hand.

Not long ago, Willis, 38, had thought his career was probably over: Over the course of five Olympic Games, he won two medals in the 1500 meters, one of only eight athletes in the history of the event to make the podium twice. He was one of the world’s great Milers, part of a rarefied lineage of middle-distance legends from New Zealand. He clocked 3:49 for the Mile and 3:29 for 1500 meters, but he was always more of a racer than a time trial specialist, his swift closing kick ensuring his share of glory—the silver medal in the Beijing Olympics in 2008, the bronze in Rio in 2016. His legacy in the sport has always been the subject of debate: He never set a world record, never won Olympic gold. But also competed in an era when doping was common. He initially won bronze in Beijing but was upgraded to silver when the winner, Rashid Ramzi, tested positive for a banned blood-boosting substance. Asbel Kiprop, who was upgraded to gold, tested positive in 2017 for EPO. Was he using back in 2008? This question no longer tugged at Willis. He had made peace with things; he had achieved all he thought he could achieve in the sport.

But then he discovered something unexpected and remarkable: Unwittingly, he had been compiling a streak, running at least one sub-4 minute Mile every year since 2003. John Walker, a fellow Kiwi and an Olympic gold medalist, held the record: 18 consecutive years, from 1973 to 1990. Willis matched Walker’s mark in 2020, then surpassed it in 2021.

Initially, Willis had been cold to the idea. “A part of me didn’t want to be known as the guy who ran a bunch of years of sub-4s,” he said. “I think it’s cool, but I’m most proud of the super-performances”—the Olympic medals. But then he began to see how the streak resonated with his middle-aged fans, how it was helping give his career a new luster. Ex-athletes, inspired by his longevity, were lacing up their shoes again and getting back into shape. He couldn’t help but embrace it.

Now here he was, in front of a crowd of two dozen or so, looking to extend the streak to an even two decades. His preparation was less than ideal: Just two weeks earlier he’d tested positive for COVID-19, missing a set of key workouts. His recovery had been swift, but had it been swift enough? Ron Warhurst, his longtime coach, gave his version of a pep talk: “We didn’t come here to fuck th 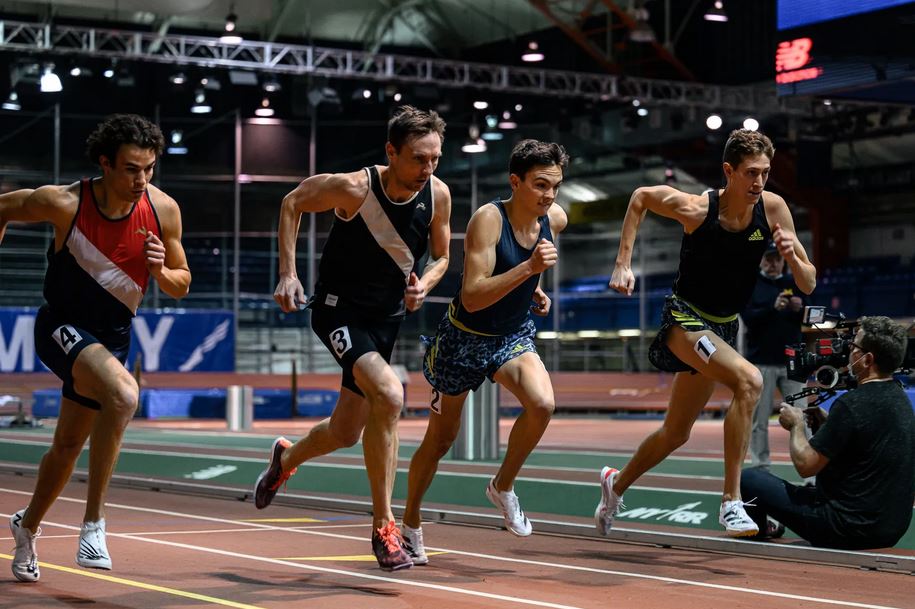 is up.” Willis, outfitted in a black Tracksmith jersey and half-tights, gave his pacers their final instructions: “Slow the first 200 meters; we have plenty of time to make it up.” As the final seconds to midnight ticked off, he glanced over to check the time on the scoreboard. Then they all stepped to the line on the banked oval, a pack of jangly nerves and coiled energy. The gun fired. The chase was on.

We are blessed to live in the age of the aging athlete. Tom Brady and his anti-inflammation diet hoisting the Lombardi Trophy at 43. Serena Williams, now 40, recovering from a harrowing childbirth to chase Grand Slam number 24. LeBron James dropping 43 on the Blazers the other night at 37. When it comes to the Mile, however, few elite athletes have challenged their limits into their late 30s and beyond. In 1994, the Irish star Eamonn Coghlan emerged from retirement to become the first athlete over 40 to break 4 minutes. And in 2015, at age 40, the two-time Olympic medalist Bernard Lagat ran 3:54 to beat the Masters record. On the track, unlike in team sports, one’s diminishing physical skills can’t be glossed over with savvy or guile: Getting more selective at the plate, or relying less on gravity-defying acrobatics around the hoop. There’s no cheating the clock, although recent advances in running shoe technology—super spikes—have contributed to faster times. (Willis, initially a hold out, wore them for the first time in Tokyo, where he made the semifinals in the 1500, running 3:35.)

Sub-4—four laps, four quarter miles averaging under 60 seconds—has long harbored mythical import, even before Roger Bannister first broke the barrier in 1954. (The world record now is 3:43, set by Hicham El Guerrouj of Morocco in 1999.) Running one 20 years in a row requires almost unfathomable discipline and durability: more than 10 miles of soul-sapping training each day on average, week after week, year after year; the desire to keep it going even as retirement and all its attendant creature comforts beckon on the horizon like an oasis; the dedication to doing all the little things, the stretching, the drills, the lifting, the massages, the 10 hours of sleep a night; the good fortune of never getting sidelined too long by injury, of getting in the right meets and not bombing when it counts.

Kyle Merber, a former U.S. Olympic hopeful (personal best: 3:52), calls Willis’s streak Cal Ripken-esque. Kevin Sullivan, a three-time Olympian (personal best: 3:50), strung together 11 consecutive years of sub-4:00s, but even he struggles to comprehend it. “For some, it’s the culmination of their career, breaking 4 minutes one time,” he said. “Here’s somebody who’s broken it at least one time in 19 consecutive years. It’s crazy to think from a longevity perspective just how impressive that is.”

Any search for the secrets of Willis’s longevity must begin with the Very Nice Track Club in Ann Arbor, Michigan. A few days before the Midnight Mile, the members of the club gathered for a final tune up at the University of Michigan’s Ferry Field. The morning was cold, the city shrouded in fog and covered in slush. The track, where Jesse Owens set four world records in 1935, is wedged between a parking lot and the Intramural Sports Building. It looks old world, like something out of St. Andrews.

Joining Willis were Hobbs Kessler, 18, and Mason Ferlic, 28. Kessler, a rock climbing prodigy, has emerged, with astonishing speed, as one of America’s next great Milers—he set a high school record of 3:34 for 1500 meters before turning pro. Ferlic, a Michigan graduate known as Big Bird for his long, gangly stride, represented the U.S. in the 3000 meter steeplechase at the Tokyo Games. Not only has Willis served as a mentor; they’ve motivated him to keep tackling the difficult training.

After a 40-minute run through the streets of Ann Arbor, Willis, who has lived here since graduating from Michigan in 2005, clicked off some 200 meter reps at 4:00-Mile pace, his back kick splashing up ribbons of water from the track. He glided along on his midfoot and toes, his efficient stride making his speed deceptive: At full flight, he looked fluid and easy, the intensity of his pace revealed only by the splits on a watch.

Warhurst, who coached the University of Michigan men’s track and cross country teams for over three decades, presided over his charges. Now 78, he has coached 11 Olympians during his career, and his outsize influence on Willis is undeniable. He turned to Sierra, Willis’s wife. “Why do you think he’s lasted this long?” he asked. “Because we didn’t kill him early?”

Warhurst, who was awarded a Purple Heart in Vietnam, isn’t one to stroke your ego. But he also has a generous spirit, a devilish streak. He recounted the origins of the club name: At the Olympic Trials in 1992, he was drinking with some fellow coaches—“crazy people”—and someone had the idea to get tattoos. Warhurst was known for yelling “very nice” at his runners, and so he had the words emblazoned on his ass.

Willis, as a 4:01 high school Miler in Lower Hutt, New Zealand, had seen what Warhurst had achieved with Sullivan, a Michigan alum who had finished 5th in the 1500 meters at the 2000 Olympics. I don’t know who his coach is, Willis thought, but I need to be coached by him. When he first showed up as a new recruit in the fall of 2002, Willis didn’t make much of an impression on the famous Michigan coach. “He looks really soft,” Warhurst remembers thinking. But a few days later, after watching him run some 400-meter repeats in 55 and 56 seconds, he realized what he had: “He might look soft, but he can run like a son of a bitch.”

Warhurst could be tough—his legendary workout, the Michigan, is a daunting combination of track work and tempo running (“timed running,” as he calls it)—but he was also flexible, open to experimentation. Willis had always taken a day off each week in high school, and so that fall in cross country, they tried it as a team and finished 9th in the country, proving the concept.