Eight with the Elites: Andrew Wheating 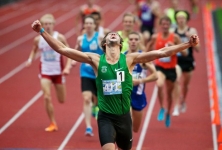 When it comes to racing, my philosophy has been the same since I was eight years old: win the race.

Beginning with this edition, Endorphin Release will periodically run pieces that ask elite athletes eight questions about their craft. The significance of the number eight, refers to balance and is considered a karmic equalizer where one reaps what one sows-just like athletes do more often than not when it comes to sport. In the Bible, it represents “beginning” and in Chinese belief, “ba” sounds like “fa” which means wealth or fortune. It is well known that the Beijing Olympics began at exactly 8:00pm on the eighth day of the eighth month of 2008.

I thought it would be fitting that the first subject would be someone who competed in the 800 meters of those very Games, runner Andrew Wheating of the Oregon Track Club Elite Team. At the London Olympics four years later, the Vermont native ran for the Stars & Stripes in the 1500 meters. Andrew’s personal record in the 800 is 1:44.56, the 1500 in 3:30.90 and the outdoor Mile in 3:51.74.

He and his Oregon Track Club teammates are training on the Thorrington Field track at Westmont College in the foothills of Santa Barbara, CA, a facility that has become a hidden fortress of sorts for training this country’s track & field elite athletes.

1. What brings you out to Santa Barbara (meaning the purpose of this OTC camp)?

Andrew Wheating: In a word: speed. We’re starting to turn the gears a bit and dig into the speedier side of training. As much as we love running in Eugene, it gets a bit too cold to push the body the way we’d like, the warm weather here helps keep muscles warm allowing for us to push ourselves without fear of injury. Plus it’s sunny and warm, which is always nice.