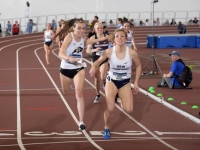 Look at the results of the Mile finals at the 2018 NCAA Indoor Track & Field Championships and you’ll see that New Mexico’s Josh Kerr and New Hampshire’s Elinor Purrier — the two NCAA leaders and pre-race favorites — were your national champions on Saturday, March 10.

But whether you’re a favorite or an underdog, it’s never easy to win an NCAA title and both Kerr and Purrier had to overcome adversity to reach this point. For Kerr, it was the stomach cramps that resulted in a last-place finish for his New Mexico team in last night’s distance medley relay — an issue that lingered into today and caused Kerr to consider scratching from this race. For Purrier, it was the mental anguish of several near-misses at NCAAs in the past, most notably a runner-up finish on this same track last year. For both, it was redemption.

Kerr won the race, his third NCAA title, in similar fashion to his first one at 2017 NCAA indoors, with a devastating late-race move. Kerr was near the front of the race throughout, leading the second and third laps, and was close behind Oregon freshman Reed Brown at 809 meters (2:02.61).

Last year, Kerr made his winning move just before two laps to go and that was the plan again this year as he went to the front at that point and ripped a 27.52 200, easily the fastest split of the race to that point. That succeeded in stringing out the field, but at the bell, Virginia Tech’s Vincent Ciattei and Oregon’s Sam Prakel were both still in with a chance behind Kerr. He left no doubt on the final lap however, upping the ante with a 26.71 to win handily in the end in 3:57.02 as Ciattei held off Prakel in a fierce battle for runner-up, 3:58.36 to 3:58.59. Neil Gourley, who anchored VaTech to the DMR win last night, was 7th in 4:00.64.

Purrier won her title the hard way as the 4:26 Miler (#2 in NCAA history) went to the lead early and never gave it up until midway down the homestretch when Colorado’s Dani Jones, who won the 3000m and anchored Colorado’s winning DMR at this meet last year, pulled even and maybe ahead by an inch or two before Purrier managed to rally back and get the narrowest of wins. She hit 809 in 2:18.17 and gradually turned the screws, going 34.55 / 34.10 / 33.88 for her next three laps to hit the bell in the lead. Notre Dame’s Jessica Harris, who had run on Purrier’s outside shoulder for much of the race, was still right there at that point, but she faded as Purrier reached her top gear on the bell lap.