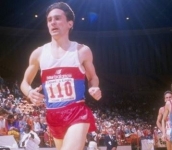 If you were a betting man, you wouldn’t have put anything on me. I was very small, very light, but I had will power to do something well.

Twenty years ago, Marcus O’Sullivan ran his 100th sub-4 minute Mile (one of only three men to do so), the last major milestone in a career that ranks among the greats of Irish sport. But the three-time world champion only found true fulfilment once he stepped off the track.

Three decades on, the sound still lingers – the deep, droning din of air horns echoing around the arena. It bounced off the walls, ricocheted down onto the track and breached the focused cocoon of O’Sullivan’s mind, a gentle reminder at a pivotal time that there are no supporters quite like the Irish.

It was Sunday night in Budapest, March 1989, and the Cork athlete had just stepped on the track for the men’s 1500m final at the IAAF World Indoor Championships.

O’Sullivan, the defending champion, was already feeling the heat, which was cranked up several notches when he saw the collage of tri-colors draped over the railings on the final bend.

The Irish soccer team, as it turned out, was playing Hungary in a World Cup qualifier just three days later, so a few hundred of the traveling fans decided to make a night of it at the Sportcsarnok arena – green jerseys on, scarves held high, air horns at the ready.

“They were a rebellious group in the midst of the track & field fans,” says O’Sullivan with a laugh.

“I remember thinking: Jesus, I’m under pressure now, these guys are expecting a show.”

And they got one.