Grant Fisher to attempt Sub-4 at Nike Festival of Miles 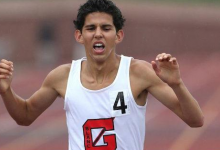 Grant Fisher will attempt to be the seventh prep in history to break four minutes in the Mile tonight; Nike Festival of Miles in St. Louis, Missouri, a 2015 BBTM Featured Event, will be broadcast live on Flotrack.com beginning at 7:00pm CST.

The secret is that there is no secret.

In an exclusive interview with the four-time national champion's private coach, Mike Scannell, MileSplit got bits and pieces of Fisher's regular training routine. But no split times or tempo paces.

"He runs a lot slower than you might think," Scannell said. "I don't say times because as soon as you put that on the internet, kids go and see it and think that's what they need to do.

Not even sub-four minute miler Matthew Maton, who became just the sixth prep in history to eclipse the elusive barrier in April, has captured the national imagination the way that Grant Fisher has intrigued the public over the past two years.