Greencastle-Antrim’s Taryn Parks reflects on nationals, looks ahead to spring 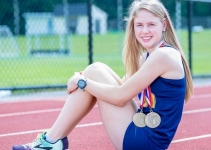 By Ben Destefan, The Record Herald

GREENCASTLE – Taryn Parks has earned plenty of praise and accolades. Still, even for the ultra-talented junior at Greencastle-Antrim High School, being called “national champion” took a few days to process.

“It has finally sunk in, but even now after I hear ‘national champion’ it’s hard to believe,” Parks said.

Parks posted the fastest indoor time in Pennsylvania HS history (#2 all-time), running a 4:39.045 to edge fellow Mid-Penn Conference star Marlee Starliper of Northern York (4:39.048) at the line. Starliper, also a junior, had what appeared to be a healthy lead at the start of the final lap before Parks hit another gear in the closing stretch. Ultimately, Parks out-leaned Starliper to win by three-thousandths of a second.

“Going through the bell lap I was just focused on the lead runner (Marlee) and trying to chase her down because all I could think was she was the only thing separating me from a national title,” Parks recalled. “I actually did not know I won because after leaning through the finish I tripped and ended up on the ground. After I got up and saw the #1 next to my name, I was so proud and extremely happy.”

Although having won back-to-back state championships in the Mile (1600 meters) during outdoor track season, this victory meant a little extra.

“This was by far the most rewarding race I have ever ran,” Parks said. “It was awesome to see all my hard work pay off.”

Something about big stages seems to bring out the best in Parks, who grabbed two gold medals at the Pennsylvania Track & Field Coaches Association Indoor State Championships last month in the Mile and shorter 800 meters.