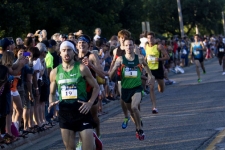 FLINT, MI -- Hundreds of runners will stretch their legs Friday night in the Special Olympics and Michigan Mile races before thousands of runners from around the world descend on downtown Flint Saturday morning for the 10 Mile, 8K and 5K events in the HealthPlus Crim Festival of Races.

Friday will begin at 6:00pm with the Lois Craig Invitational, which is the Crim's Special Olympics-style race for athletes with disabilities. Racers will begin south of the bridge on South Saginaw Street, and go to the start line of the Crim.

"It's only a couple of blocks, but for some of them, that's an extremely daunting distance, depending on their disability or their level of disability," said Crim Race Director Andrew Younger. "It can be something that's a real challenge. They get inspired by the people that come out and cheer them on, so we encourage people to be a part of that."

The Michigan Mile events start at 7:00pm and 7:07pm with the men's and women's Professional Mile races featuring top racers from around the world, including Grand Blanc native and 2012 Olympian Geena Gall-Lara.