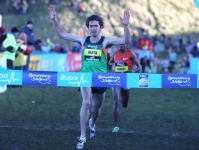 "It must feel great to be in a race with (Asbel) Kiprop and (Kenenisa) Bekele," one of the younger runners said.

Heath (photo: John Nepolita), a former All-American at Stanford and one of America's top professional Milers, paused for a moment and then offered: "You know what would be even better? To beat those guys."

Heath said Thursday that he made that comment in jest. But hours after he said it, Heath ran away from the two Olympic champions and an international field to win the 4-kilometer cross country event in 11:51.

It's been a busy couple of weeks for Heath, 28, who will race the Mile at the New Balance Games on Saturday at The New Balance Track & Field Center at The Armory. Just this week, he switched shoe companies, going from Saucony to Brooks. It's a move that will entail an eventual move to Seattle.

"Things are all over the place this week," Heath said. "I moved my stuff into storage in Palo Alto over Christmas Break, I was home (in Minnesota) for Christmas and then I went to see my brother (Elliott) in Portland. So I've been living out of a suitcase. Things have been a little bit more up in the air and hectic than I'd like."