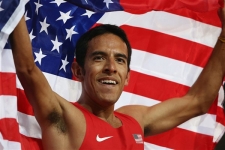 Manzano said the media attention swirling around the needs of the organization convinced him that his charity, Manzano Mile, could help out.

At Austin's City Hall, Manzano presented Chief Art Acevedo with a check for $7500 to help close the funding gap.

A few weeks ago, Manzano was the Grand Marshal in the Chuy's Children Giving to Children Parade -- which also benefits APD's Operation Blue Santa.