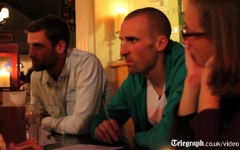 In the fifth of our exclusive videos tracking three British 1,500m athletes in their attempt to qualify for London 2012, we join Andy Baddeley as he trains for the Games in Richmond Park, west London.

Baddeley recently exceeded the 'A' qualifying time for the London 2012 Olympics in spite of a serious heart condition and now looks set to wear the Team GB vest at his second Games after finishing eighth in Beijing.