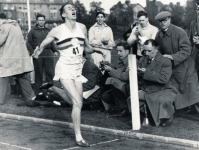 By Sam Jones, The Guardian

Coral bookmakers are still taking bets, even though Sir Roger has now emerged as the overwhelming favorite to perform the task at Friday's opening ceremony.

Although Sir Roger competed at the 1952 Olympics in Helsinki, he failed to win a medal, meaning that he would be an unusual choice to light the flame, which has traditionally been an honour bestowed on great Olympians.