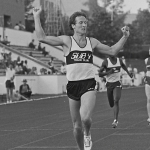 A Mile is four laps on the track that some have called the perfect distance and a four-act play. Oslo's Bislett Games Dream Mile in the 1980s was the pinnacle of this classic distance, pitting world class Milers against each other year-after-year.

This Mile era was also arguably the most competitive and golden. In 1980, Steve Ovett (GBR) set the Mile world record (3:48.8) at the Dream Mile, only to have it lowered three more times by himself and fellow Brit Sebastian Coe (3:47.33) in an epic stretch of racing in August 1981.

Without question, Steve Scott had one of the most decorated Mile careers, including an incredible 137 sub-4 minute Miles (a record not likely to be broken), but perhaps this "dream" race in 1982 was his biggest Mile moment.

Below are videos of Steve Scott's two American records set in the month of July beginning with the most famous of them all: his 1982 "Dream Mile" at the Oslo Games..