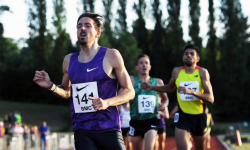 Ross Murray raced to a superb victory in the 1500m at the British Milers’ Club Grand Prix in Watford on Saturday night.

Murray fought off a strong challenge from Tom Lancashire and Tom Farrell to win in 3:37.76 – a season’s best and his fastest since 2012.

With just a week to the Sainsbury’s British Championships, Lancashire, who led into the home straight, will take encouragement from his time of 3:38.33, his best time since 2012, with Farrell just behind in 3:38.57.

The African was in a class of her own but, behind her, British international Jess Judd and Melissa Courtney had a terrific battle.