My Quest for Sir Roger 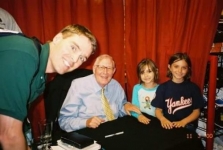 Our moment with Sir Roger was just as inspiring. Greeting my daughters and asking them their names and how old they were was just the beginning of a grand few minutes.

I was running late.

Leaving my teaching job on Staten Island to travel to New York City during rush hour was no easy feat. But this was a big trip.

In a way, my journey that day reflected the juggling of priorities and events which Sir Roger faced daily during the early 1950s. His ascent to the "Everest" of Running coincided with his equal ascent to pursue medicine. The young Medical intern even went to work the morning of May 6, 1954. Making his usual rounds around the hospital, he then boarded a train to Iffley Field at Oxford, England hoping to do what no man had ever done and what some experts believed was physiologically impossible.

After leaving work I went and picked up my two young daughters and fellow sports fan Charles Greinsky, who navigated the obstacles of traffic and poor weather as we ventured into the island of Manhattan.

On that fanned day in 1954 Sir Roger worried about the weather as well. Despite encouragement from coach Franz Stampfl and pacesetters Chris Brasher and Chris Chataway, It seemed that Bannister was skeptical to say the least about what he hoped to accomplishment, as wind and rain seemed to make the attempt impossible.

Like Sir Roger we also had a time deadline to meet. His 2006 appearance at Paragon Sports store in Manhattan was only scheduled for 2 hours. As the weather and traffic continued building Charlie and I quietly hoped we'd be able to make it.

In the mid-afternoon of 1954, the rains stopped and the wind died down. His spirit uplifted, Roger decided to give it a go. He prepared himself for his moment.

Our preparations were somewhat different. Of course we would purchase Bannister's grand book The Four Minute Mile. Charlie also brought along with him some track spikes he hoped to get signed.

Back in the early 1990s I learned of a great method to acquire treasured autographs from some of the world's greatest Milers. Sub-4 Miler and top Masters runner Kenny Popejoy had once shown me his collection of autographs he acquired in Cordner Nelson and Roberto Quercetani's epic book The Milers. Replete with yearly stories and photos going back more than a hundred years, Popejoy was able to acquire many of the greatest Mile athlete signatures.

Taking that idea from Kenny I began bringing my copy around as well. Eamonn Coghlan, Jim Ryun, Seb Coe, Abe Kiviat, Ron Delany, Steve Cram, Said Aouita, Kip Keino and a host of others had graciously signed the book for me.

But I had not acquired the one signature on the largest picture centerfold in the book: Sir Roger. "That's the big one!," said Popejoy.

My book was ready.