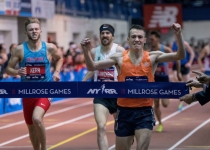 Clocking 3:54.14, the 27-year-old led a Scottish one-two on Saturday night as he was followed over the finish line by Josh Kerr, the two-time NCAA champion moving from 53rd to fifth on the UK indoor all-time list with his PR of 3:54.72.

Ahead of his season opener in New York, O’Hare had told AW how he was “ready to roll” and also looking forward to seeing his wife Meredith and 16-month-old son Ronan after having spent the past month at a training camp in Flagstaff.

Following his victory, O’Hare was joined on the track by Ronan and the Wanamaker Mile trophy.

“It’s a prestigious race,” he said, “so to get your name on that trophy is pretty special.”